Supermicro enforces a vendor-lock in on BIOS updates via IPMI, even though they publish the update files for free here. The only free alternative is to time-travel to 1995 and boot from a DOS disk to supply the update. All other options (including the Supermicro Server Manager) require a license. 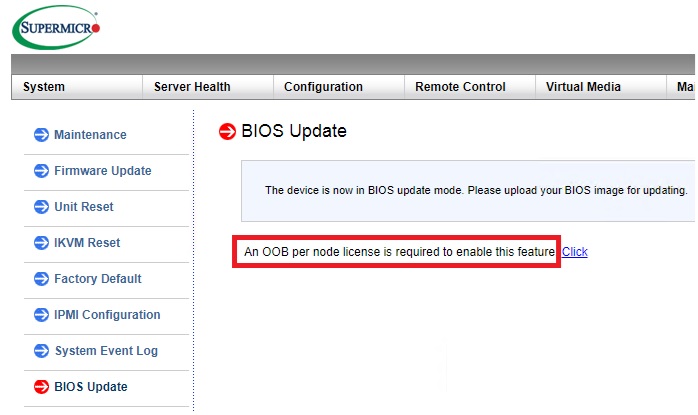 They published BIOS updates to address Spectre and Meltdown vulnerabilities, yet make it almost impossible to actually perform the update. Even if you go their suggested way, buying a key from an authorized Supermicro reseller people on the internet report it’s difficult and time consuming getting them. I was quoted 25 EUR and an estimated 2 weeks delivery time.

You buy a brand new product, it has a known vulnerability and you should pay for the update?! This is simply NOT acceptable. As the owner of my device I shall be free to update it. Therefore, I spent exactly 1 night reverse engineering this thing to figure out the license key algorithm. tl;dr here is the algorithm to generate those license keys:

Anybody can create the license key on https://cryptii.com/pipes/QiZmdA by typing on the left side (select Bytes) the MAC address of the IPMI (the BMC), select in the middle HMAC and SHA-1, enter the secret key and on the right side the License Key will appear!

This was successfully tested with Supermicro mainboards from 2013-2018. It appears they have not changed the algorithm and use the same “secret”. The first 6 groups go in here:

Update 1/14/2019: The Twitter user @astraleureka posted this code perl code which is generating the license key:

Update 3/27/2019: There is also Linux shell version that uses openssl:

Update 9/15/2019: Twitter user @zanejchua provided the link https://cryptii.com/pipes/QiZmdA which makes it easier to generate the code.

Information about IPMI (skip this if you’re an expert)

The IPMI is a remote management mechanism of servers, embedded in a chip that is separated from the typical resources accessible by the operating system. It allows remote management of servers even when it’s turned off. It’s really useful when your server is not responding and you don’t to want or can’t physically go there to troubleshoot. You can even install an OS via IPMI, start the server & even go into the BIOS. Thanks to HTML5 Supermicro switched away from those old Java applets (anyone developing anything in Java should be banned to a far, far remote island; Java should die in a fire, it’s slow and has 9999 vulnerabilities and on top of that Oracle will go after you for trademark and patent troll reasons even though it’s open source).

I want to point out previous research work which helped me a lot.

The tool binwalk will scan the binary and look for signatures of known formats:

Use a hex editor (such as HxD) to extract the CramFS binaries and store them to new files. It is an embedded compressed Linux file system that contains the files that we are interested in.

Next get a Linux system and mount both files each with this command and then dump all files into a tar file:

Congrats! You now have the actual files of the IPMI system.

Finding the HTML/JS code that provides the user interface for activation was easy: Use the browser’s built-in developer tools (F12) to look at the code, then look for the same code on the extracted IPMI file system.

As you can see below, the IPMI website (that you visit as system administrator) calls “/cgi/ipmi.cgi” with certain parameters for checking if the key is valid. 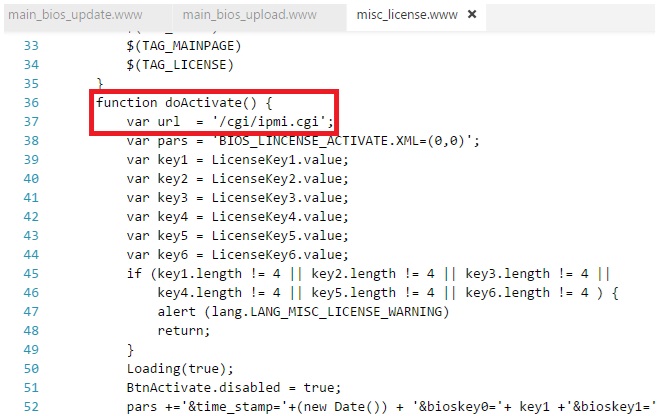 Here are the breadcrumbs I followed from the website part:

The response is XML with check set to 0 if invalid and 1 if valid (it’s weird that they do not use JSON instead): 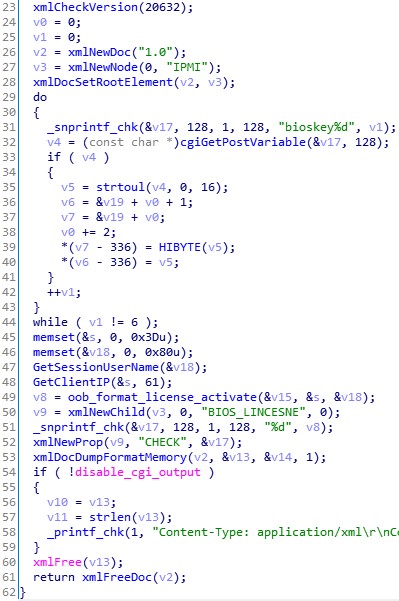 The actual check of the license is done in another file “libipmi.so” which implements the referenced function oob_format_license_activate:

You can see here already the actual license key algorithm referenced – HMAC_SHA1. It is important to notice the 12 in the function call, which means 96 bits. The 96 bits is exactly the length of the key, represented in hex to the end-user.

Interestingly there is a function “oob_format_license_create” which creates the license and is even easier to read. You can see directly the reference to the private keys. “oob” means out-of-band, i.e. processing the update via IPMI.

The Supermicro keys are:

At the beginning of this blog post it is explained how you can easily use this to create your own Supermicro License Key.